Herbal medicines, dietary supplements, and other natural products have been traditionally produced from wild collected raw material. Several of the more popular plants including Hydrastis canadensis, commonly known as goldenseal, have been over collected from the wild to the point of being declared endangered specie. By definition, wild collected raw material has been produced in an environment without controls leading to wide variations in raw material quality and subsequent consumer disappointment in the effectiveness and reliability of the products they purchase. 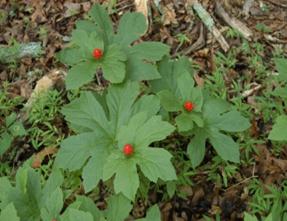 Goldenseal is native to the deciduous forests of Eastern North America and has been an item of commercial trade since the 1700’s when it was first shown to European settlers by the Native Americans.  Traditionally used for infections, digestive disorders, sore mouth, and wound healing, more than 3,000 scientific articles currently exist supporting the potential benefits of goldenseal and/or it primary alkaloid constituent, berberine (NLM, 2013).

Early on goldenseal became so useful as a medicine to the early settlers that by the mid 1880’s concern was expressed for its survival in the wild due to over collection.  By 1908, more than 300,000 pounds were reportedly wild collected annually prompting the USDA to urge farmers to initiate cultivation of the plant (Henkel, 1908).  Goldenseal was a mainstay in the arsenal of 19th and early 20th century physicians until the advent of mold based antibiotics in the 1940s.

Demand for goldenseal waned during the 1950’s and 60’s with a dramatic resurgence beginning in the 1970’s and 80’s as consumers began searching for natural alternatives to synthetic pharmaceuticals.  By 1997, almost 100 years of USDA calls (Henkel 1908, USDA 1949, USFWS 1997) for cultivation of the plant had gone largely unheeded while the market was again consuming more than 350,000 pounds of goldenseal root/rhizome per year (~60 million plants) with less than 2 % (~6,000 pounds) coming from cultivated sources (USFWS, 1997).

A lack of fundamental information regarding how to profitably cultivate the plant combined with extremely slow growth (4 - 6 years to maturity) and very little price premium for cultivated goldenseal vs wild collected material resulted in no incentive for growers to risk the time and/or effort required to cultivate the plant.  This situation combined with habitat loss resulting from land development led the US Fish and Wildlife Service to recommend, in 1997, placement of goldenseal on the Convention on International Trade in Endangered Species (CITES) Appendix List II in an effort to “buy time for the plant while sustainable production methods are developed”.

In 2001 Sleepy Hollow Farm was granted a USDA Small Business Innovation Research award to develop a USDA National Organic Program (NOP) certified production system for goldenseal usable by small family operated farms. The project was successful and the system was taught to more than 20 small farmers across four states GA, AL, TN, and NC. These growers have established more than 10 acres of wild simulated, USDA NOP certified organic goldenseal, effectively doubling the organic goldenseal acreage in the US and providing a sustainable supply of raw material from which we produce Goldenseal Advancedtm products.

Henkel, A. And GP Klugh. 1908. The cultivation and handling of goldenseal. USDA Bureau of Plant Indust Circular No. 6.

USFWS, 1997.  Amendment to Appendix II of Convention on International Trade in Endangered Species of Wild Fauna and Flora.  Proposal to include Hydrastis canadensis in Appendix II in Accordance with Article 2, Paragraph 2A.  U.S. Fish and Wildlife Service, Washington, D.C.

*These statements have not been evaluated by the Food and Drug Administration.  These products are not intended diagnose, treat, cure, mitigate, or prevent any disease.  This statement is required by the Food, Drug, and Cosmetic Act.

Support for this work is gratefully acknowledged from a series of Small Business Innovation Research Awards from the United States Department of Agriculture/National Institute for Food and Agriculture (USDA/NIFA) and the National Institutes of Health/National Center for Complementary and Alternative Medicine(NIH/NCCAM). The opinions expressed are those of the Author and do not necessarily represent those of USDA/NIFA and/or NIH/NCCAM.